The Biography of Chao Gu

Chao Gu was named Yuanxiu. His father was Chao Zhongshi, a farmer in Meishan. He was taught by a Shidafu when he was young, and he taught students in a school in his village when he was old. Chao Gu learned with his father when he was young. Although his family was poor, he had lots of knowledge. He saw a man who could fight very well while he was taking an examination in the capital, and he liked fighting at once. Chao Gu was very strong, so he gave up learning. He prepared bows and arrows, and learned riding horses and shooting. Soon, he succeeded in studying it, but he failed the writing test.

It was said that the people in the west was good at fighting, and their skill of fighting was the best in the country, so he went to Qingfeng and Jingyuan. He made friends with heroes there. A man called Han Cunbao was his closest friend. Chao Gu taught him the art of war. They had the friendship like gold. In the years of Xining, Cunbao, leader of soldiers in Hezhou succeeded in fighting the enemies. So he was known as ‘the famous leader of Xihe’. The king paid attention to him a bit. Qidi of Luzhouman happened to attack the country. Many provinces couldn’t fight against them, so the king ordered Cunbao to lead the soldiers to attack them. Cunbao didn’t know about the custom of their country, so he invited Chao Gu to give him advice in the camp. Later, Cunbao broke the law. He was going to be caught. He expected that he would die, so he said to Chao Gu, ‘I’m a fighter in Jingyuan. My death won’t be a pity. However, my wife and children would have to suffer from hunger and cold, and they’ll be poor. There is still some money in my pocket. No one but you can take the money to them for me.’ Chao Go agreed. He changed his name, and brought the money to Cunbao’s sun on foot. No one knew about this. After Cunbao died, Chao Gu stayed in Jianghuai until the king pardoned.

Chao Gu and I were born in the same village, so we knew each other when I was young. I know he had great idea, and he was a man who can be trusted to do different kinds of things. Then I became a leader of the country, but Chao Gu was in his hometown. We didn’t have a chance to meet.

In the first year of Shaoshen, I stayed in Yunzhou because of my fault. Soon I moved to Leizhou, then to Xunzhou. My elder brother Su Shi also moved from Huizhou to Changhua. No leaders dared to communicate with us. We also didn’t hear from our relatives and friends. Only Chao Gu said publicly that he would visit us on foot. People who heard what he said all laughed at him and thought he was mad. In the first month of the second year of Yuanfu, he wrote a letter to me from Meishan and said,’ I have walked a long way to visit you. I didn’t expect I could have been alive until today. I am in Meizhou now, and we will meet soon. I won’t have a pity if I die.’ I was surprised and said, ‘He isn’t a man living now, but an ancient man!’ After we met, we shook hands with each other and cried. Then we talked about the stories happened in our lives. Although we had talked about this for over a month, we weren’t still tired of it. Chao Gu was 73 years old then. He was thin and had many sicknesses. He wasn’t that Yuanxiu many years ago. He was going to Hainan to visit Zizhan. I showed sympathy for him because he was old and weak, so I wanted to stop him. I said, ‘Although you’re kind, it’s quite a long way from here to Zizhan’s. In addition, you have to take a ship. It isn’t what an old man can do.’ He said, ‘I think I won’t die right now. Don’t stop me!’ I couldn’t stop him. I looked at his bag, and found only a little money. I happened to be poor, but I still gave him some money as much as possible. When Chao Gu’s ship arrived in Xinhui, a foreign servant stole his bag and ran away. He was caught in Xinzhou. Chao Gu followed him in Xinzhou. Soon he died of disease. When I heard that, I cried out loudly. I complained that he didn’t take my advice, but I was surprised that he didn’t take my advice to realize his wish.

I live in the south with the native people now. I think I will die here. Although I knew he was kind and helpful, I had no idea about how to spread his stories. I heard that he had a son named Chao Meng who was in the army in Jingyuan, so I could only write a biography for him and give it to his son some day. Chao Gu changed his name into Gu after meeting me in Xunzhou. 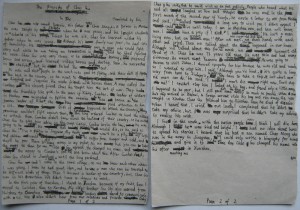